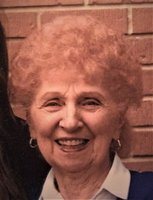 Irene A. Kalinowski (84) of Plains Township passed away on Saturday, February 22, 2020, while under the brief, but compassionate care of the Wesley Village Nursing Home and Residential Hospice with her entire family at her side. Born on November 10,1935, Irene was the daughter of the late Anna Stanko and Frank Balut. She was raised in the Miners Mills section of Wilkes-Barre and was a 1953 graduate of Coughlin High School where she served on her graduating class reunion committee and, for many years, enjoyed reminiscing over lunch with her lifelong friends, the “ Coughlin Girls”. Irene worked tirelessly and selflessly her entire life as a devoted mother, homemaker, and wife. She also held various administrative jobs throughout her career, retiring from the Social Security Administration after more than twenty years of service. She was a member of Saints Peter and Paul Church in Plains and, in her later years, was a food service volunteer at it’s affiliated school, until its closure, and dedicated volunteer for Catholic Social Services. She was and active member of the First Catholic Slovak Ladies Association, serving as president of Branches 38 and 211 and was a former member of their National Court of Appeals, Beachwood, Ohio Office. However, the role that she loved and cherished most in her life was that of “Grammy Irene”, to her four loving grandchildren, never missing a school,sporting, or special event for as long as her health permitted. In addition to her parents, she was preceded in death by her husband Stanley, beloved daughter Darlene Hvozdovic, and infant son Richard. Surviving are her daughter Debra Henry, Hanover Twp; son David and wife, Rose, Mountaintop; grandchildren Lindsey Henry Bruns (Cody), Grandview Heights, OH; Michael Henry Jr.(Kaitlyn), Arlington, VA; Nicole Hvozdovic, Mountain Top; and Lauren Kalinowski, Mountain Top; son-in-law Joseph Hvozdovic Jr., sisters Joan Sheraski and Marian Brzycki; several nieces and nephews. In keeping with Irene’s wishes, services will be private and held at the convenience of the family at the Chapel of St. Mary’s Cemetery in Hanover Twp. Services have been entrusted to the Yanaitis Funeral Home Inc, Plains Twp.