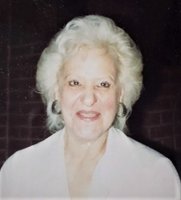 Lena L. Sedler (Sedli) Schoenberger, of Bethlehem, passed away on June 16,2020, at the Manor Care, Bethlehem. She was 89. Lena was the 12th child of the late Andrew and Theresa (Hodi) Sedli. She was the former wife of the late Thomas O. Schoenberger. Lena was preceded in death by her 5 brothers: Joseph, Peter, Andrew, John, and Michael, and by her 6 sisters: Mary, Anna,Theresa, Elizabeth, Cecelia, and Catherine. She was also preceded in death by her daughter Darlene M. Rau. Lena worked as a sewing machine operator, a manager at the Bethlehem Police Social Club and as a waitress, most recently at the Top Diner. She loved to go dancing and socialize after work. She adored her cat Mokosh. Lena is survived by daughter Cindi L. Wetzel and her husband David, son Guy T. Schoenberger Sr. and wife Maryann, and daughter Janet K. Beller, 9 grandchildren, and 14 great grandchildren whom she loved dearly. A private memorial will be held at a later date by immediate family only. Arrangements are in the care of the Yanaitis Funeral Home Inc., Plains Twp.