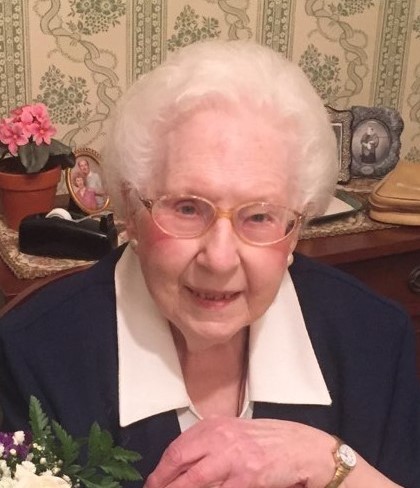 Please share a memory of Leona to include in a keepsake book for family and friends.
View Tribute Book
Leona (Shivell) Rowker passed into eternal rest with the Lord on January 12, 2021. She was 97 years and 1 day young. Lonie, Blondie, Mom, Mother, Grandma, Mamacita. She was a truly remarkable, faith-filled woman who loved her family dearly. Leona grew up in the Hudson section of Plains, graduating from Plains High School and Wyoming Seminary Business College. She used the school’s location to plan the perfect after school trips – a mile round trip walk for ice cream, which she enjoyed often. Leona was often found by her father’s side at various events throughout the area, as he was the Register of Wills for Luzerne County and well-known in political circles. Leona met the love of her life, Joseph (whom she affectionately called Romeo), as he strode up the sidewalk at her home with his fellow Marine brother, Jay. Together, they formed an indomitable partnership and raised three children, Joseph (Joey), Elaine, (Lainey), James (Jim-joosh). Leona was employed by the state of Pennsylvania and worked in various state offices throughout her career. She retired from the workman’s compensation office in 1991 to become a full-time grandma, a role she cherished. After 97 years, there are countless stories about Leona as a sister, wife, mother, grandmother, and great-grandmother. Before leaving the house for the day she would remind everyone to say, “Everything I do today is for the glory and honor of God.” A devout Catholic, Leona was a deeply devoted follower of St Jude, who she often prayed to for guidance and support. Leona often spoke of memories made with her sister, Helen (Helcha), her best friend and confidant. She also fondly spoke of her younger brother, John, who she always referred to as Sonny. Leona was preceded in eternal rest by her parents, John Sr. & Catherine Shivell, brother, John Jr. & his wife Theresa Shivell, husband, Joseph Sr., and son, Joseph Jr. She is survived by her loving sister Helen Winiewicz, Hudson, daughter Elaine & her husband Michael Ziobro, Hudson, son James & his wife Ruth, San Pedro, CA. She is also survived by four grandchildren, Jared, David, Leann, and Monica, nieces, nephews, great nieces and nephews, and two great grandchildren. Family and friends are invited to attend Leona’s Mass of Christian Burial on Friday, January 15, at 1:00p.m. in Saints Peter and Paul Church, 13 Hudson Road. Mass will be celebrated by Rev. John Lambert, Pastor. Interment will be held privately at the convenience of her family. In lieu of flowers, Memorial Donations can be made in Leona's memory to the St. Jude’s Children's Hospital, 501 St. Jude Place, Memphis, TN 38105.
To send flowers to the family or plant a tree in memory of Leona Rowker, please visit Tribute Store
Friday
15
January

Share Your Memory of
Leona
Upload Your Memory View All Memories
Be the first to upload a memory!
Share A Memory
Send Flowers
Plant a Tree