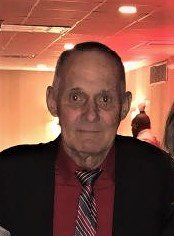 Please share a memory of Edward to include in a keepsake book for family and friends.
View Tribute Book
Edward Joseph Collum, 76, of Plains Township, passed peacefully at his home with his wife and family by his side on Sunday, February 7,2021. Born in Wilkes-Barre on February 23,1944, Ed was a son to the late Harry and Loretta Curtis Collum. He attended schools in the Wilkes-Barre Area and also attended St. Mary’s High School, Wilkes-Barre. Ed worked in construction for Pre-Fab Homes and as a gas pipeline worker for Hacken and Lindi. He also did site maintenance for the Wyoming Valley Mall and M & T Banks. Ed was a member of the LANI Club VFW Post 35, Plains Township, where he participated on the club’s baseball team and the Polish Club of Hudson, where he participated in the pitch league. Ed was most proud of being a loving husband to his wife, Therese, for the past forty-eight-years, father to his children Tara and Edward II, grandfather to his 6 grandchildren and great grandfather to his two great grandchildren. He was preceded in death by his loving parents Harry and Loretta, sister Barbara Lingle, and brother Frank Collum. Edward is survived by his wife Therese, at home; daughter Tara Price and her husband Dale, Shavertown; son Edward II and his wife Katrina, Plains; grandchildren: Kayleen, Carissa, Edward III, Johnny, Olivia, and Ethan, great grandchildren Jackson and Nolan, and brother James, Wilkes-Barre. A walk-through visitation will be held on Tuesday, February 9, 2021, at the Yanaitis Funeral Home Inc,55 Stark St Plains, from 5:00 p.m. until 6:30 p.m. A Vigil service will begin at 6:30 officiated by Rev Joseph Kearney. Masks are required at the funeral home and capacity will be enforced. For condolences to the family or for directions to service, please visit www.yanaitisfuneralhome.com.
To send flowers to the family or plant a tree in memory of Edward Collum, please visit Tribute Store
Tuesday
9
February