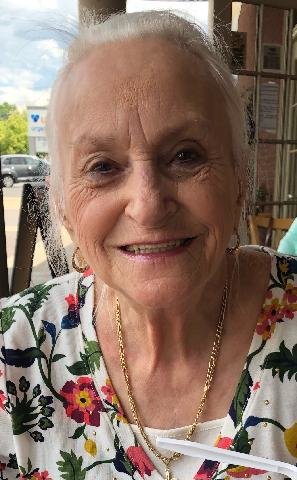 Please share a memory of Audrey to include in a keepsake book for family and friends.
View Tribute Book
Audrey Jean Ostopick, 82, of the Hilldale section of Plains Township, passed into eternal rest on Monday , March 8,2021, while in the care of the Commonwealth Wilkes-Barre General Hospital. Born in Nanticoke on April 14, 1938, she was one of nine siblings of the late John and Rose Lipinski Rasmus. Audrey grew up in the Nanticoke area and attended local schools. At a young age, she began working in the local garment industry. She was employed by Country Maid Apparel, Leslie Fay, and retired from Favorite Brands Inc. During this time, she was a member of the I.L.G.W.U. In 1957, Audrey married Joseph Ostopick. As a young couple, they moved into the family homestead in Hilldale to start their family. Together they raised five children: Joseph, Virginia, Paula, Eileen and Joseph Jr. In 1978, Audrey lost her husband and the children lost their father due to an untimely death. In 1979, Audrey started a new venture in her life and opened the Cuckoo‘s Nest Bar, in Plains Township on Maffett Street for a few years until she decided to sell the business. Throughout her life, Audrey relied on her faith to help her persevere in raising her young family. She was a member of St. John the Evangelist Church, Pittston. Her hobbies included caring for her pets: Daphne, a Cocker Spaniel and Miss Kitty, her cat. She also enjoyed gardening and tending to her flowers. Her other passion was to go and watch the horses run at the local track. She was preceded in death by her parents John and Rose; husband Joseph; infant son Joseph; sisters Josephine Smith and Dorothy Balas; brothers Leonard, John, Charles, David, and Gerald. Surviving are her daughters Virginia Jiunta (Dr. James) Shickshinny; Paula Lashuay(Mark), Palmetto, FL; Eileen Getz (Kevin), West Wyoming; son Joseph Jr., Hilldale; sister Rose Swanberry, Nanticoke; brother in law Samuel Ostopick, Laflin; grandchildren Stacey Yuknavich (Shawn), Hilldale; Kevin Getz Jr., West Wyoming; Ariel Lowe, Parrish, FL; Lea Mousley (Austin), West Wyoming; great grandchildren Dalano Yuknavich, Austyn Lowe, and Jolie Lowe; several nieces and nephews, and her faithful cat Jazz-purr. Audrey was laid to rest next to her husband Joseph in Mount Olivet Cemetery. Services were held privately at the convenience of the family. To honor Audrey’s memory, memorial donation may be sent to Medical Oncology Associates Prescription Assistance Fund, 382 Pierce St., Kingston, PA,18704. Arrangements were in the care of the Yanaitis Funeral Home Inc., Plains Township.
To plant a beautiful memorial tree in memory of Audrey Ostopick, please visit our Tree Store

A Memorial Tree was planted for Audrey
We are deeply sorry for your loss ~ the staff at Yanaitis Funeral Home, Inc.
Join in honoring their life - plant a memorial tree
Services for Audrey Ostopick
There are no events scheduled. You can still show your support by planting a tree in memory of Audrey Ostopick.
Plant a tree in memory of Audrey
Print
Online Memory & Photo Sharing Event
Online Event
About this Event