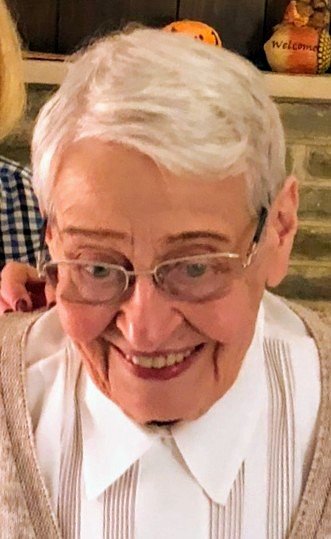 Born in Wilkes-Barre on May 18, 1927 she was a daughter of the late Louis and Elizabeth Bednar Martin.

Ruth attended local schools and was a graduate of GAR High School, class of 1945.

Upon leaving school she was employed as a seamstress for Gort’s manufacturing. A short time later Ruth married Albert Bezdziecki and together they celebrated sixty-three years of marriage. They began to raise their family and Ruth stayed at home to run the household and care for their children.

Ruth was a past member of St. Joseph Church, Hudson, were she participated in church and bazarre activities. She was a current member of Saints Peter and Paul Church, Plains.

A visitation will be held on Thursday morning April 4, 2019 from 9:30 am until 10:30 am in the chapel of the Mercy Care Center, Dallas. A mass of Christian burial will be celebrated at 10:30 am by Rev. Richard Rojas. Interment will follow in St. Joseph Cemetery, Hudson.

Memorial contributions, in Ruth’s name, may be made to Mercy Center, P.O. Box 370, Dallas, PA 18612. Condolences can be sent to family at www.yanaitisfuneralhome.com.

Share Your Memory of
Ruth
Upload Your Memory View All Memories
Be the first to upload a memory!
Share A Memory
Plant a Tree