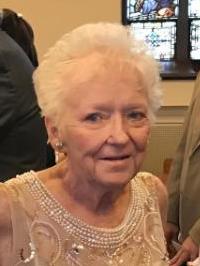 Beatrice S. Karavitch, 79, of Plains Township, left the loving care of her surrounding family and was welcomed into the arms of her Lord and Savior in the early hours on Monday, August 19,2019, while in the care of the Wilkes-Barre General Hospital.

Born in Wilkes-Barre on January 25, 1940, she was a daughter of the late William and Beatrice Miller Gould.  Beatrice grew up in the Miners-Mills and Parsons area where she attended Wilkes-Barre Schools and was a graduate of James M. Coughlin, class of 1959.

On February 25, 1960, Beatrice married the man who she would love and cherish for the next 59 years, Robert Karavitch. Together they raised their four children in the Plains area and were life residence. During these years, Beatrice held various jobs and  was a homemaker. Through her whole life her most important role was being a loving mother, grandmother, and great grandmother to her family.

Beatrice enjoyed having fun. She loved baking, cooking, planning parties, shopping and playing the slot machines at the casino. She was an avid sports fan of the New York Yankees and The Dallas Cowboys.

She was a member of Saint John’s Evangelist Church in Pittston.

She was preceded in death by her daughter Donna Fleig, grandson Andrew Casterlin and her brother Robert Gould.

Beatrice’s funeral services will be held on Friday August 23, 2019, at 9:00 a.m. from the Yanaitis Funeral Home Inc., 55 Stark Street, Plains Township. A Mass of Christian Burial will be celebrated at 9:30 a.m. in St. John’s the Evangelist Church, 35 William Street, Pittston. Entombment will follow in St. Mary’s Cemetery, Hanover Township.    A visitation will be held at the funeral home on Thursday from 5:00 p.m. until 8:00p.m.

To send condolences to the family and for directions to services, please visit www.yanaitisfuneralhome.com.