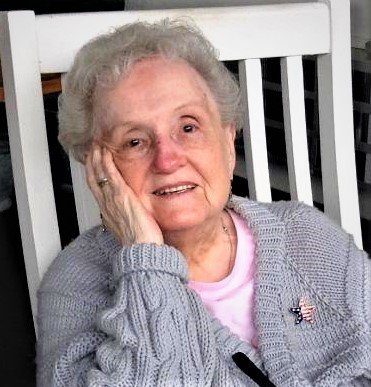 Bernadine Theresa Stella , 87, of the Hudson section of Plains Township, returned to the Lord on Tuesday, October 22, 2019 while under the care of the Gardens at East Mountain, Plains Township.

Born in Plains Township on May 4, 1932, she was a daughter of the late Clement and Anna Rusnak Pomichter.

She worked for Barre Slipper of Wilkes-Barre, until she married her husband Angelo Stella on June 22, 1950.  They settled in the Hudson section of Plains Township were Angelo opened his Drum School and Bernie helped to run the business for the next forty six years.

Bernie was a devoted Catholic and was a past member of St. Joseph Church, Hudson, until its closure. She later became a member of Saints Peter and Paul Church, Plains.

In her spare time, she loved to do puzzle books while drinking her Hazelnut Dunkin Donut Coffee, she loved to listen and watch Polkas on television with the Lawrence Welk Show. She was a New York Yankees and Buffalo Bills Fan.

Everyone knew Bernie for her beautiful smile and her kind nature way of helping her family and friends.  She will be remembered as a loving mother, grandmother, sister, and friend.

She was preceded in death by her loving parents, and her husband Angelo Stella, October 25,1996, and her sister Tina Wesser.

Funeral Service will be held at the Yanaitis Funeral Home Inc., 55 Stark Street, Plains, on Friday, October 25, 2019, at 11:30 a.m. Service will be officiated by Deacon Donald Crane. Interment will be next to her husband in the Mount Olivet Cemetery, Wyoming. Visitation will be held on Friday morning at the funeral home from 9:30 a.m. until time of service.

A special thank you to the caring and loving staff of the Gardens of East Mountain for the  caring concern for Bernie during her time at your facility, God Bless you all.

To send flowers to the family or plant a tree in memory of Bernadine Stella, please visit Tribute Store
Print
Friday
25
October