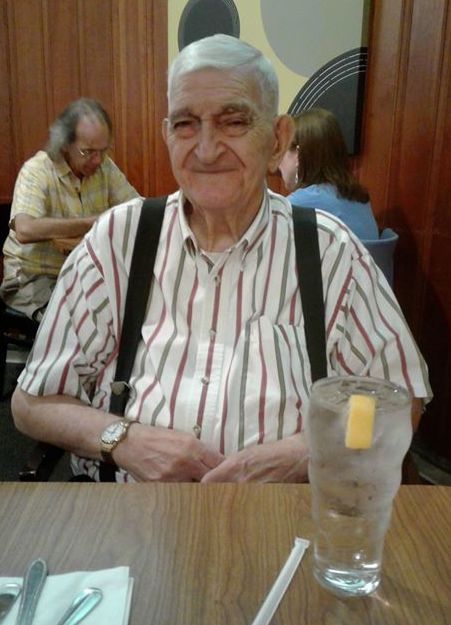 Please share a memory of Stephen to include in a keepsake book for family and friends.
View Tribute Book
Stephen Thomas Harchar, 93, of Hudson passed away Thursday, May 28,2020, at the Veterans Administration Medical Center, Plains Twp. Born in Swoyersville, on August 6,1926, he was the son of the late John and Anna (Adamchick) Harchar. He attended Swoyersville schools until the 8th grade, at the age of 14, Stephen took on the role of care giver for his mother and worked at a local grocer. On December 13, 1944, he enlisted in the U.S. Navy and was stationed on the U.S.S. Marquette until he was honorably discharged July 5, 1946. Shortly after the war, he met and married Joanie Grumsey. Prior to his retirement, Stephen was employed by Chamberlain Ammunition and Craft Associates. Stephen took an early retirement in July 1974, after losing his wife Joanie to raise his beloved daughter at the age of 5. Stephen loved to bake for the holidays, it brought him joy and he will be remembered for it. Proceeding him in death his beloved wife Joanie; brothers John, George, Andrew, Joey, and Frank; sisters Peggy Konopka, Anna Harchar, Mary Harchar, and Bernadine Hrycyna. Surviving Stephen is his beloved daughter Stephanie Ann and numerous nephews, nieces, and cousins who will all miss him. Stephanie would like to say thank you to the staff of the VA Medical Center, Dr. Kaneria and Joe Butkiewicz RN for the extra care and attention that was given to my Dad in the final part of his journey home. Thank you also to my family for their support and love at this time. In Lieu of flowers donations, please make a donation to the Disabled American Veterans. Funeral Service for Stephen will be held on Thursday, June 4, at 9:30 a.m. from the Yanaitis Funeral Home Inc., 55 Stark Street, Plains. A Mass of Christian Burial will be celebrated at 10:00 a.m. in Ss. Peter and Paul Church, Plains, with Rev. John Lambert, Pastor, and Rev. Dennis Grumsey co-celebrant. Interment will follow in parish cemetery, Plains. Visitation will be held on Wednesday June 3, from 6:00 p.m. to 8:00 p.m. Due to the state mandate, attendance cannot exceed 25 people. For online condolences to family and for directions to services, please visit www.yanaitisfuneralhome.com.
To send flowers to the family or plant a tree in memory of Stephen Harchar, please visit Tribute Store
Print
Wednesday
3
June